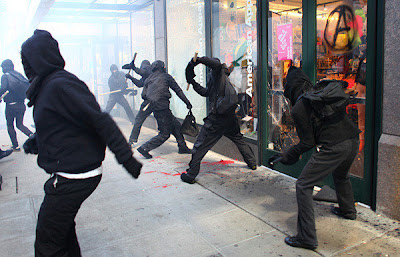 If not actually agents provocateurs, these anarcho-hoodies were at least doing their job and working hard to discredit the movement. In their minds, they're playing glorious revolutionaries but in actuality they're serving the opposition. Nixon used to hire street thugs to hurl insults at him, one of his many documented dirty tricks, which led to some staged law and order routines that drew waves of applause from Middle America. This reminds me of the WTO protests here in Seattle in 1999, when a well-organized, broad-based coalition of labor, environmental, student and peace groups rallied peacefully and marched downtown but a few self-styled anarchists in hoodies busted windows at Niketown and played right into the hands of the opposition--cops and civic leaders and armchair TV viewers who were just dying to dismiss the entire legitimate demonstration, and of course this "justified" a massive police crackdown on everybody that included violence, teargas, pepperspray, flashbombs and an eagerly obedient mayor proclaiming downtown a "protest-free zone." Of course, the news focused on the violence ("If it bleeds, it leads") and skipped the valid concerns of the majority to "explain" the overworked, underfed policemen's behavior (couldn't deny some of those clubbing and gassing clips, after all) and dutifully interviewed sad shopowners who lamented that this would absolutely RUIN holiday shopping. Same as it ever was. In all honesty, when you organize a rally and march and tens of thousands of people show up it's exceedingly difficult to "constrain your ranks" against a few fast hit-and-run window breakers, just as it's hard to constrain a handful of violent, black-clad, baton-swinging riot police. It sounds good on paper, but even the best organized protest does not have a single mind. Everyone plays a role. Bring on the backlash.  And I should mention, in spite of some gloryhounds busting glass, I still support the aims of the Occupy movement: justice and equality for all, and no special loopholes for the top 1%.
Posted by Bob Rini at 10:04 AM