Maybe you saw it on the news, another brutal rampage sandwiched between stories as a mentally ill gunman leaves a bloody trail before killing himself.  It's a horrific scene, but such a common story there is a formula by now: the crime scene; the police briefing; stunned witnesses; the newscaster's concern; and then on to sports and the weather.  But for those of us in Seattle, particularly those of us in the arts community, particularly those of us that frequent a friendly neighborhood bar hospitable to artists and musicians, this tragedy hits close to home. 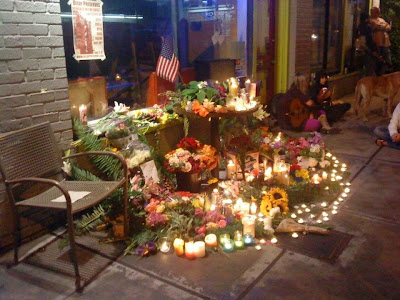 The day after, we're still shocked by the shootings at the Cafe Racer.  The community is reeling and no one will ever forget this terrible moment.  Like many others, I've been going to this neighborhood cafe for years, where Kurt Geissel and his crew provided an hospitable hangout for artists and musicians. The Racer was the official clubhouse of our art collective, The Friends of the Nib, as well as it's offshoot, the Bureau of Drawers, and home of the Museum of Bad Art.  We met at the cafe at least once a week, and it's hard to imagine how many nights we spent drawing and drinking, staging art shows, hatching crazy plans and enjoying rolicking live music.  Even harder to imagine is how this neighborhood cafe has turned into a crime scene where so many lost their lives. 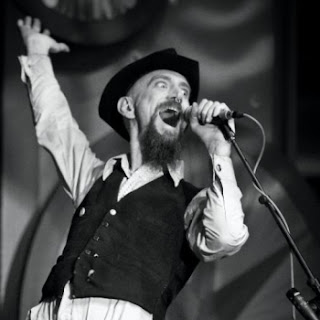 One life lost yesterday was that of Drew Keriakedes, otherwise known as Shmootzi, a gonzo cabaret musician and circus performer right out of a Fellini movie who swallowed swords and sang the blues.  Anyone who knew him--or even just crossed his path--recognized his genuine creativity and humor and big heart.  Drew played wild music with a crazy band, God's Favorite Beefcake, which also included his bandmate, Joe "Vito" Albanese, who also died in the same senseless rampage. Two others shot at the cafe, Kimberly Layfield and Don Largen, died later at Harborview Medical Center.  A fifth victim, Leonard Meuse, is still fighting for his life.  Yet another victim, Gloria Leonidas, was killed a half an hour later across town by the same killer who then stole her SUV to escape to West Seattle where, finally cornered, he turns his gun on himself. 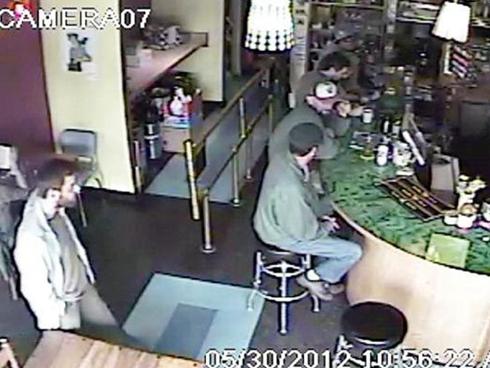 The gunman, who had been 86ed from the cafe for his erratic behavior, is shown here on a surveillance camera as he approaches the bar in the cafe where he will shoot five people execution style.  According to the Seattle Times, one man in the bar, whose brother had been killed in the terrorist attacks on the World Trade Center and had vowed he "would never hide under a table," in the event of a deadly threat, threw a stool at the shooter and possibly saved lives of others in the cafe.  "The hero, he says, was Leonard Meuse, the barista at the cafe who, even after being shot several times, got on the phone and made a call for help."  The shooter takes off on foot, heading north on Roosevelt, sparking a huge police manhunt.  All afternoon helicopters pass overhead and police move door to door with dogs.  Roosevelt High School is locked down, and people are advised to stay indoors while the search continues.  Eventually the police link the Leonidas killing to the cafe murders, and track down the killer.

Remembering the fallen.  From the left, Joe and Drew, bandmates. The third person pictured is Kimberly Layfield, an aspiring actress, also killed at the Cafe Racer. The fourth person is Gloria Leonidas, mother of two, killed by the same shooter a half an hour later in a parking lot near Town Hall and robbed of her SUV, which the shooter used to escape. The final picture is Donald Largen, an urban planner and sax player, also killed at the cafe. Not shown is Leonard Meuse, the chef at racer, who is still in recovery.
Posted by Bob Rini at 3:55 PM