CATS GET FATTER, FILM AT ELEVEN 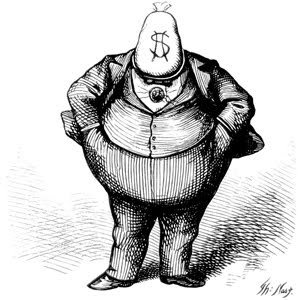 Those greedy bastards are at it again. According to a recent report from the Institute for Policy Studies, since the economic crisis began the CEOs that laid off the most workers received the highest pay. Maybe that's not a big surprise to you, but instead of being ho-hum cynical you should be freaking outraged. Someone is getting screwed here--and unless you're a billionaire CEO it's probably you. Wake up, sporto. They call it "free enterprise" but it's corporate robbery.

"CEOs of the 50 firms that have laid off the most workers since the onset of the economic crisis took home 42 percent more pay in 2009 than their peers at S&P 500 firms."

The capitalist system works--if you happen to be on that side of it. Sure, it's cheaper laying people off. Sure, if you cut wages there is more for the boss, but this is an economic crisis. It's a tough time for people and we shouldn't be allowing CEOs to reward themselves for slashing jobs.

Do something: Stop Executive Excess!
Posted by Bob Rini at 4:06 PM