DELILLO AT THE WALL

Don Delillo, one of our greatest living novelists, reads a memo prepared by the CIA for the Justice Department concerning the agency's detention, interrogation, and rendition programs, as part of the 2009 PEN event Reckoning with Torture: Memos and Testimonies from the "War on Terror."

Delillo rarely makes a public appearance. This is exceptional. Not quite as reclusive as Pynchon or Salinger, but nearly so, most know Delillo only through his writing--masterful, labyrinthine explorations of the American psyche, totalitarianism, baseball, the JFK assassination, the effects of technology, the national security state. His best work includes Libra, White Noise (which won the National Book Award), Americana and Underworld, which contains the brilliant prologue "Pafko at the Wall," which was later released as a stand-alone novella. 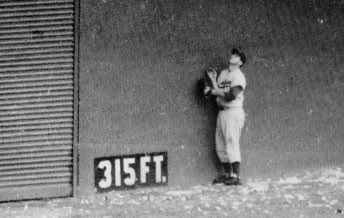 "Pafko at the Wall" is the story of the New York Giants beating the Brooklyn Dodgers in a race for the pennant on October 3, 1951 at the Polo Grounds in New York City. The story centers on the crowd--the celebrities and swells, the kids playing hooky, the ticket takers, the howling fans--at the moment Bobby Thompson hits the game winning home run. This was baseball history, the shot heard 'round the world. With absolutely masterful storytelling, Delillo takes you out to the ballgame, takes you out to the crowd. You hear the crack of the bat, Pafko looks up, kids scuffle for the ball--and in fact the book will follow the ball through the hands of various owners over the years. The story’s title comes from this photograph of Dodger’s fielder Andy Pafko standing at the left field wall watching the ball sail into the stands. 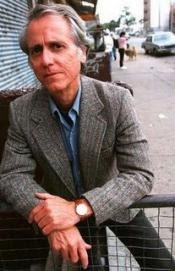 Born November 20, 1936, the child of Italian immigrants from the village of Montagano (Campobasso), Delillo was raised in an Italian American neighborhood of the Bronx. He always felt like an outsider, but an insider, too--and this seemingly contradictory vantage point of the second generation American--not quite in, not quite out--served him well as a novelist. He has the critical eye of the outsider who happens to know the inside story, and he captures the idiom and dialects of America like no other. With pitch perfect dialogue and a natural authority, he chronicles the uneasiness of modern American life, the breath of conspiracy and paranoia lurking behind our politics and our gleaming new technologies, and the gradual creep toward a brave new, friendly-faced totalitarianism. Don't be afraid, he might say. Or be afraid, it doesn't matter, this will happen anyway. Delillo's work will be studied seriously--and read with pleasure--for many years to come.

"He speaks in your voice, American, and there's a shine in his eye that's halfway hopeful."

So begins "Pafko at the Wall," the first section of Underworld. In this interview with Terri Gross, the author discusses the book.