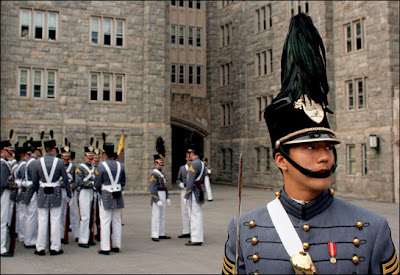 Why is it so often that the best people are stuck in the middle and the people who are running things—the leaders—are the mediocrities? Because excellence isn’t usually what gets you up the greasy pole. What gets you up is a talent for maneuvering. Kissing up to the people above you, kicking down to the people below you. Pleasing your teachers, pleasing your superiors, picking a powerful mentor and riding his coattails until it’s time to stab him in the back. Jumping through hoops. Getting along by going along.

-from Solitude and Leadership--a brilliant lecture delivered by William Deresiewicz to the plebes at West Point in October of last year. Read it in The American Scholar.


Paris in the fifties?

Oh it was terrific because the cafés were such great places to hang out, they were so open, you could smoke hash at the tables, if you were fairly discreet. There was the expatriate crowd, which was more or less comprised of interesting people, creatively inclined. So we would fall out there at one of the cafés, about four in the afternoon, sip Pernod until dinner, then afterwards go to a jazz club. Bird and Diz, and Miles and Bud Powell, and Monk were all there, and if not, someone else. Lester Young and Don Byas. It was a period when the Village and St.-Germain-des-Pres were sort of interchangeable, just going back and forth.

--From an interview with Terry Southern at the Paris Review.

It is no secret that publishing these kinds of lists can be tricky. Whatever the intention, they sometimes resemble a publicity stunt. The age cutoff, whether 25 or 35 or 40, can feel capricious. After a list is made public, there is the inevitable sniping that some writers on it were too famous to have been included and that others were unfairly excluded.

The New Yorker just selected the best writers under the age of forty. See who made the list in this post from Bookfox and this article in the New York Times.

He died in 1982, broke, decrepit, most probably mentally ill. He had been manhandled by publishers, agents, studios. He loved to quote William Burroughs’s definition of the paranoid, applicable to himself then as well as to reams of his characters: “He’s the one with all the information.”

-from Brains, Bats, and Implanted Thoughts: The Perpetual Life of Philip K. Dick at Bookslut

We rate schools based on their contribution to the public good in three broad categories: Social Mobility (recruiting and graduating low-income students), Research (producing cutting-edge scholarship and PhDs), and Service (encouraging students to give something back to their country).

See this year's ranking of liberal arts colleges in the nation in The Washington Monthly.

The Greatest Records of All Time?

There were many brilliant songs that were overlooked, and many that ended up in used record stores and apple crates in Mom and Dad's garage, but Rolling Stone tried to pick their top 500. Agree or not, check out their list at Rolling Stone. They make it difficult to see the entire list without the patience of Job, but you can see the list more easily at Metrolyrics.
Posted by Bob Rini at 2:55 PM