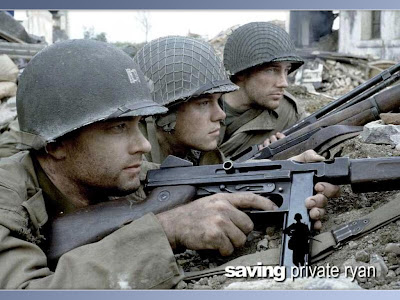 We love war movies because we feel the thrill of battle, the life or death consequences of every move, the exhilaration of violence. It's a trick played by actors and directors and cinematographers. For a few moments, with their help, we can forget the exigencies of the day, the worries of the workplace, the horrors of the daily news--storms and floods and oil spills and actual wars--and vicariously struggle with the warrior. The DVD plays, and we take a hero's journey. The best war films, from Casablanca to Apocalypse Now, Platoon to African Queen, give us people we care about. The best war movies keep the mystery and confusion of war, and don't ennoble violence or glorify it. That jingoistic John Wayne crap may stir the blood and increase enlistment, but it's not great film as much as propaganda.


Tim O'Brien on war movies. "I’ve often thought what a cool movie, for example, if you go to a war movie and out of the screen came real bullets."

The best war movie we've seen in ages is Ken Burns' seven part World War II documentary, "The War." This riveting series follows a handful of common people from four American towns, sent from Main Street to all corners of the globe. 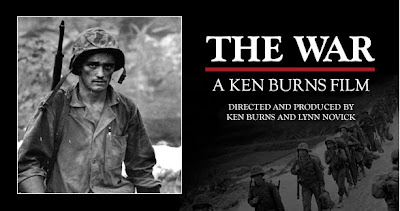 "Above all, we wanted to honor the experiences of those who lived through the greatest cataclysm in human history by providing the opportunity for them to bear witness to their own history. Our film is therefore an attempt to describe, through their eyewitness testimony, what the war was actually like for those who served on the front lines, in the places where the killing and the dying took place, and equally what it was like for their loved ones back home. We have done our best not to sentimentalize, glorify or aestheticize the war, but instead have tried simply to tell the stories of those who did the fighting -- and of their families. In so doing, we have tried to illuminate the intimate, human dimensions of a global catastrophe that took the lives of between 50 and 60 million people -- of whom more than 400,000 were Americans." - Ken Burns and Linn Novick

For more about the series, click here.
Posted by Bob Rini at 5:35 PM