Sure, jaywalking is a serious crime. We don't condone it. Nor do we condone full grown men punching teenage girls in the face. Especially not cops, who should be trained to handle tough situations. That's what happened, though. Here's how the Associated Press reported it:

"Officer Ian P. Walsh, 39, was trying to arrest 19-year-old Marilyn Levias for jaywalking on Monday when her 17-year-old friend pushed him. He then punched the young woman in the face. Walsh and Levias had been struggling before her friend pushed him. The entire incident was caught on video, where bystanders can be heard saying 'Are you serious?'”

Good question. Policemen are given the power to carry lethal weapons and trained to handle the most extreme situations. Generally, their word is good, but this cop says he was justified. I'm glad a citizen caught it all on tape.

Blue sticks together. The head of the Seattle Police Officers' Guild said the policeman was justified. "He did nothing wrong," said Rich O'Neill. “I think he was trying to defuse the situation and calm people down.”

So was anyone reprimanded or arrested? You bet. The 17-year old girl was charged with assaulting a police officer. Nice job, guys.

According to the AP, "Several community groups feel that the punch was too severe, and mirrored a video taken in April of two Seattle officers kicking a Hispanic suspect." 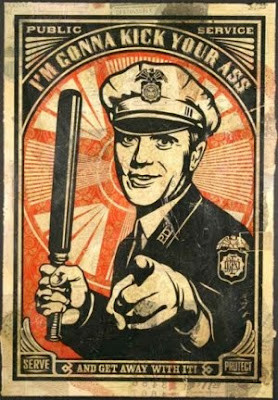