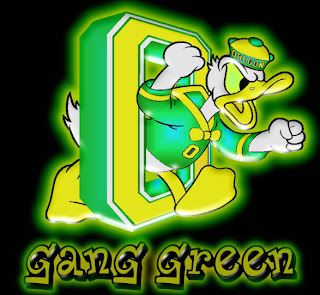 The University of Oregon's celebrated Ducks have gone to pot.  According to the Eugene Register-Guard, "a report on marijuana use by college football players published Wednesday by ESPN suggested that about half of the University of Oregon football team uses the drug, which under athletic department policy can lead to dismissal from the team after four failed tests."

ESPN reported that perhaps 40 to 60 percent of the current team uses marijuana.  “I’ve heard weed was bigger before I got there,” said one Duck, “but [Coach] Chip [Kelly] cracked down on that. He’ll actually attend classes with guys. If you miss a study hall, he’ll drug-test you.”

According to the Register-Guard, "Former players interviewed by ESPN detailed the culture of marijuana use in Eugene — fostered, they said, by the local hippie culture and the months-long rainy season that encourages indoor activities."  Okay.  It's rainy in Oregon.  Add boredom, and the chronic pain experienced by many football players, and you have a recipe for Crispy Duck.

I'm not surprised. This is I-gene, after all. The lines have blurred. Back when I was in high school in Oregon the jocks drank beers and the freaks smoked grass, but toward the end of my senior year the athletes and hippies were going to the same parties and (can we say this?) everyone was inhaling bales of weed.  I'm not naive.  Many might deny it now, or have trouble admitting it in our current anti-drug climate (which is actually schizophrenic, since polls show at least half of Americans favor legalization or decriminalization) but back in the Seventies weed was as common as beer, and though they might deny it to employers, voters or their children, they probably inhaled.

Pro ballplayer Dave Meggyesy wrote a classic book about the dehumanizing aspects of pro sports, took on the NFL, basically, and also challenged stereotypes of the "dumb jock," being an extremely bright fellow who participated in anti-war activities and union organizing. He also mentioned widespread drug use among players, and not only painkillers (I remember one record-setting field goal kicked on mescaline, if memory serves). The NFL was furious. A lesson learned about stereotypes. Who knows, maybe someday less draconian pot laws will allow us to treat cannabis the way we treat an ice cold martini--not for everyone, not for minors, not to overindulge in, not while driving or operating heavy machinery, but for adults, in moderation, and probably not during an election year.
Posted by Bob Rini at 9:42 AM