Muddy Waters would have been 99 tomorrow. As an awe-struck cub reporter, all of 22, I weaseled my way into "interviewing" Muddy backstage. Our meeting consisted of lots of listening on my part (I was at least that smart) while we drank champagne. I kept thinking, I'm drinking champagne with Muddy Waters. Obviously, I'm still pretty impressed with my good luck. Celebrities come and go, but this man made it all happen. Happy birthday, Muddy. Cheers! 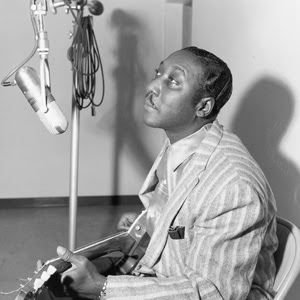 Muddy Waters was born McKinley Morganfield in Jug's Corner, Mississippi, in 1913. In 1940, he moved to Chicago for the first time, then returned to Mississippi where he ran a juke joint, complete with gambling, moonshine and a jukebox. He came back to Chicago in 1943 and brought the Delta sound North, electrified it, and changed music forever--leaving his mark on all that followed: blues, rhythm and blues, rock 'n' roll, hard rock, folk, jazz and country music. Yes, the Rolling Stones named themselves after one of his songs, and Dylan gave him a nod in his biggest hit, Like a Rolling Stone. He's been covered by everyone from Led Zeppelin to Eric Clapton, and today his influence can be heard notably in the music of Jack White (of the White Stripes) and the Black Keys.

Liner notes: The players on the top clip ( at the Newport Jazz Festival in 1960) are also outstanding bluesmen: That's Sonny Boy Williamson on harp, Willie Dixon on bass and﻿ Otis Spann on piano! Below: a great performance from the 1968 Copenhagen Jazz Festival, where Muddy's band consists of "Pee Wee" Madison on guitar,  Otis Spann on piano,  Paul Oscher on harp,  Sonny Wimberley on bass and S.P. Leary on drums.
Posted by Bob Rini at 10:01 AM