This is worth reposting. If you've spent a few hundred midnights hunched over a manuscript like a hyena picking at a carcass, you know writing is difficult to do well. The key phrase here is, "to do well," since most people write to a certain degree of proficiency, at least enough to knock out an email now and then, all too easily, but even after one masters the rudiments of grammar and syntax (a step that takes one beyond the crowd clogging the trailhead) the journey has just begun, and one is still a long way from expressing something unique, unified, precise and meaningful on the page. Learning the rudiments is essential, like playing scales on the piano, but that's where the real work begins, because writing is more than just the mechanics of craft--even with all the structural questions out of the way, there is still that strange elusive bird--the poetic, the artistic, the mythic--that escapes our imperfect nets, a bird most writers may never capture or even spot. And we're only talking artistic success. We haven't even mentioned getting the work published, which is next to impossible. That might explain the nearly obsessive nature of writers (or artists, or pianists, or anyone who would excel at something) and the long hours they put in, day after day, that may never "pay off" in the marketplace. Just as a cellist in the symphony might seem like a perfectionist to someone with a tin ear, the writer is seeking artistic success. That might explain why serious people continue to write, to attend workshops and MFA programs,to risk so much at a profession in which so few will find success(I've heard that only 1% of those with MFAs in writing will make a living from writing--a failure rate that would close down any other professional school). So why write? Why, why why?

When Kurt Vonnegut started writing, there were only two programs that offered degrees in writing. He attended neither.

"There are now at least 100 creative writing programs in American colleges and universities," he wrote in an essay, Despite Tough Guys, Life is Not the Only School for Real Novelists. "That the subject is taught anywhere, given the daunting odds against anyone making a living writing stories or poems, might appear to be a scandal, as would be courses in pharmacy, if there were no such things as drugstores."

Vonnegut is a rumpled truth-teller, a sad-faced old prophet, a pessimist and a realist who won;t candy-coat a bitter pill. He's telling the truth, even if it is discouraging, because it is the truth. No, it's not logical, and it's not vocational training, and it probably won't provide its practitioner with a huge sack of money, or money at all. Yet he goes on.

"The primary benefit of practicing any art, whether well or badly, is that it enables one's soul to grow. So the proliferation of creative writing courses is surely a good thing. Most came into being in response to demands by college students during the 1960's that their courses make more use of their natural impulses to be creative in ways that were not emphatically practical."

Vonnegut the pessimist suggests there is more than money and the marketplace, and even suggests there is such a thing as a soul--not in the religious sense, and not in the pinched, narrow sense --and says practicing art is good for it. How out of phase with the modern world, this Vonnegut. What a sad, rumpled, truthful and wise old man telling us what we don't want to hear. The truth. And that--not simple cliches, not hackneyed phrases, not comforting lies--is what we hope to write.

And so it goes. 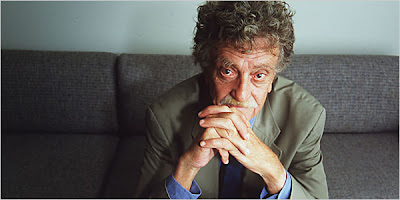 Kurt's rules for writing are worth reposting:

1. Use the time of a total stranger in such a way that he or she will not feel the time was wasted.

2. Give the reader at least one character he or she can root for.

3. Every character should want something, even if it is only a glass of water.

4. Every sentence must do one of two things—reveal character or advance the action.

5. Start as close to the end as possible.

6. Be a Sadist. No matter how sweet and innocent your leading characters, make awful things happen to them—in order that the reader may see what they are made of.

7. Write to please just one person. If you open a window and make love to the world, so to speak, your story will get pneumonia.

8. Give your readers as much information as possible as soon as possible. To hell with suspense. Readers should have such complete understanding of what is going on, where and why, that they could finish the story themselves, should cockroaches eat the last few pages.
Posted by Bob Rini at 11:58 AM