THE DAY OF THE EXPANDING DAN 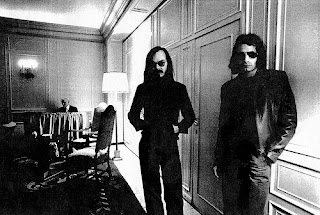 So useless to ask me why. Throw a kiss and say goodbye.  I'll make it this time. I'm ready to cross that fine line. Steely Dan morphed from an off-kilter pop band to a jazz rock outfit propelled by crack session musicians under the guidance of co-founders Donald Fagen and Walter Becker. Loopy and radio-friendly from the start, their music hid a much darker world in its lyrics, and a strange, offbeat, New York sensibility. After all, they named themselves after a sex toy in a William Burroughs novel so how wholesome could they be?  No matter.  Even when they emerged years later playing polished yacht jazz/rock that brought to mind California sunshine and mountains of blow, they kept their weirdness. Good for them.


Now they may look like the old men selling egg creams at the Gem Spa, but they're still freaking us out. A friend told me they were touring again, which might be...interesting. Here are a couple tunes, and some studio interviews to pique your curiosity.