John Stewart of the Kingston Trio just died at the age of 68. The Kingston Trio seems dated now, like something out of folk music spoof "A Mighty Wind," and even back then hardcore folkies considered them inauthentic and "commercial," but they brought folk to the masses after The Weavers got blacklisted in the anti-communist scare, and long before Joan Baez showed up barefoot, with Dylan in the wings.
The Kingston Trio were clean-cut Americans with striped shirts and collegiate looks, not cafe beatniks by any means, but they somehow got America singing about murderer Tom Dooley. Barely out of diapers, I sang along, too, and also sang "Scotch and Soda," so I guess these guys had me singing about murder and booze long before grade school. How cool is that? John Stewart wasn't even an original member -- he replaced Dave Guard when the band was exploring new directions, covering songs like Woody Guthrie's "Deportees," and the Irish rebel song "The Patriot Game." Stewart also wrote the Monkee's hit "Daydream Believer." So long, John! 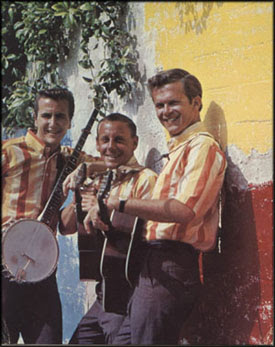 John Stewart is on the left.
Posted by Bob Rini at 9:06 AM