A rogue trader somehow masterminded a huge bank fraud that cost the French bank Societe Generale over $7.15 billion. Yes, BILLION. The lone trader, identified as Jerome Kerviel by the Financial Times, has admitted the fraud.

According to ABC News, the company said Kervial "was responsible for basic futures hedging on European equity market indexes...That means he made bets on how the markets would perform at a future date." Bank chairman Daniel Bouton said Kerviel's motives were irrational, and the financial manipulations didn't earn him any money.

I'm no expert at bank robbing -- and I don't condone or encourage such felonious behavior -- but isn't robbing banks about getting the money? That's the trick, right? Otherwise, what's the point?

To give you some sense of scale, here is an actual photograph of a quarter of a billion dollars. Imagine twenty-eight times this much money, plus a little more. That's what we're talking about. 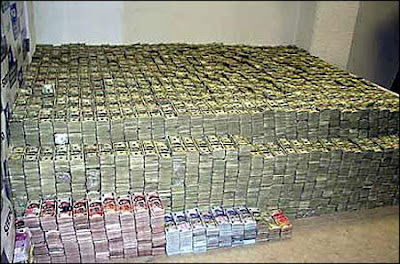