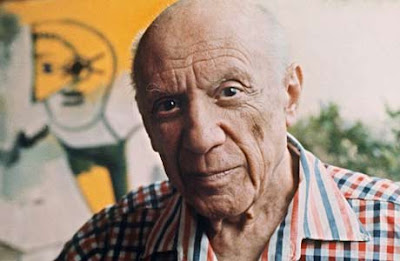 The third volume of John Richardson's A Life of Picasso has just been published. I just read a review in the New York Review of Books, and now I wish I had the books -- and a time machine! Here is an excerpt from the review by Andrew Butterfield.
The book starts with Picasso's trip to Italy in the spring of 1917 in the company of Jean Cocteau, Sergei Diaghilev, and Léonide Massine, three of his four collaborators on the ballet Parade that they were then planning. Erik Satie, the composer of Parade, stayed home in Paris, but Igor Stravinsky joined the group in Rome and swiftly became close friends with Picasso. Stravinsky and Picasso studied the Sistine Chapel and the museums of Rome, and with Massine and Cocteau explored the ruins of Pompei and Herculaneum. In Rome they went to the puppet theater, and in Naples they attended performances of commedia dell'arte, experiences that not only helped shape Parade but later directly inspired the ballet Pulcinella which Stravinsky, Massine, and Picasso created in 1920.


For the entire review
http://www.nybooks.com/articles/20892

A clip from the documentary "Le Mystère Picasso", produced and directed by H. G. Clouzot. France 1956.
Posted by Bob Rini at 4:45 PM