COLBERT FIXES FLAG (AND SO CAN YOU!) 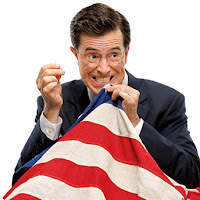 You know by now that Stephen Colbert, the satirist and host of the Colbert Report, was shut out of the January primary in South Carolina. CNN reported that party higher-ups voted to keep Colbert from the ballot because "he does not appear to be campaigning to win if he is only running in one state," according to State Democratic Party Chairwoman Carol Fowler.

Colbert is out, and we're back to that lackluster line-up of poll-watching pols groveling for money and the middle ground.

We salute Stephen Colbert! Sure, he's a charlatan and a fake, but he knows it. I'm sure by now everyone realizes he's not really the neo-con he plays on TV -- that's a persona (look it up, biyatch!). Even Republicans finally figured it out. Colbert is truly funny, and everyone knows finding truly funny right wingers is like finding WMDs. Hannity? O'Reilly? Limbaugh? They're like scolding ex-husbands. Put them in the same room, it's an anger management class. Would you rather have a beer with Colbert, or some cranky Republican with a prostate the size of an Escalade who is experiencing Oxycontin withdrawal? No contest, amigo. Not even close. Colbert is cool. He even has a new book out, and he wrote it himself: http://www.amazon.com/Am-America-So-Can-You/dp/0446580503

Now that he's out of the race, Colbert's highest political moment remains his roast of Bush and the media at the 2006 White House Correspondent's Association Dinner. With the President sitting a few feet away, Colbert launched a barrage of "jokes" blending courage and "truthyness," qualities woefully lacking in both the Presidency and the mainstream media. It wasn't for everyone, and it was largely ignored by the mainstream media (imagine that) until the blogs got a hold of it. Colbert's "performance" was a cheerful surprise in those dark days, when it seemed everyone had had their brains sucked out by the military-industrial complex and replaced with candy apples. Sure, the Bush bandwagon rolled on, and the war continued unabated, but Colbert managed to get in some good licks when he had the chance.

For those of you who missed it, or didn't "get it" the first time, here is the Colbert roast in it's entirety. Warning: extreme "truthyness."

disagree with the south carolina dems?

I thinking blocking Stephen Colbert sure made it a lot less interesting race. How about you?