The Vincent Black Lightning was the world's fastest motorcycle. Only thirty were ever built, between 1949 and 1952.

Vincent, a British manufacturer, built the bikes for speed, stripping off unessentials and using lightweight alloy rims and racing tires, magnesium alloy brake backing plates, and aluminum fenders. With a 70hp engine, the Lightning remained the world's fastest bike twenty years after the last one was built. 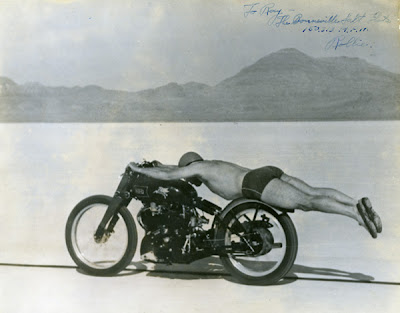 This is 1949. Racing a Vincent Black Lightning at the Bonneville Salt Flats wearing full leathers, Rollie Free could only get up to 147 mph. At that point his leathers flapped so violently they tore. Free thought for a moment, then stripped down to helmet, shoes, and a Speedo bathing suit, and was clocked at 150.313 mph!

The Vincent Black Lightning -- A rare gem, a beautiful machine, the holy grail of high performance motorcycles, and something special to put on your Christmas list.