This rare clip of the Belgian gypsy guitar player Django Reinhardt was recorded in 1938. He was a musician and artist of the first rank, and influenced countless others with his astounding talent. Here he's playing with his famous band, the Quintette du Hot Club de France, which included his longtime musical partner, violinist Stephane Grapelli, and his brother Joseph.
It's amazing he could play at all. Injured in a caravan fire at the age of eighteen, his right leg was paralyzed and his left hand badly burnt. Doctors prepared to amputate his leg, but he refused to grant them permission, and after a year of difficult rehabilitation he was walking with use of a cane. He taught himself a new way to play with his damaged fingers. He sure did!
Find his records. Listen to "Nuages", "Belleville", "Djangology", and "Sweet Georgia Brown", and you'll be hooked for life.

The drawing is from my sketchbook. 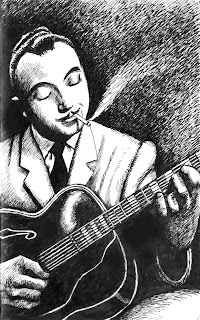