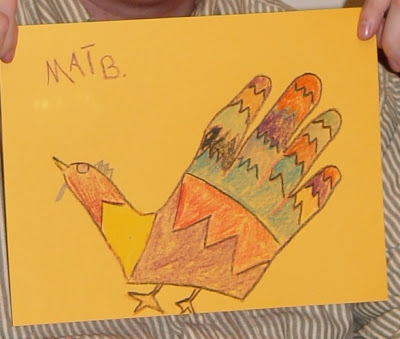 This is a classic hand turkey. Mat B. did an excellent job. As an artist, I appreciate his deft use of color and composition, the clean line, the work/play fusion of elements, the contrast of holiday happiness barely saved from cloying sentimentality by a sense of impending doom. The turkey will not last the week.
When I was a kid, I drew plenty of these. In fact, I actually won a "Draw a Turkey Contest." I appeared on a kiddie cartoon show, the "Ramblin' Rod Show." Nowadays, parents might be less willing to send their kids to a man with such a name, but back in the innocent early sixties it was all good, clean fun, and "Ramblin' Rod" was the perfect gentleman. 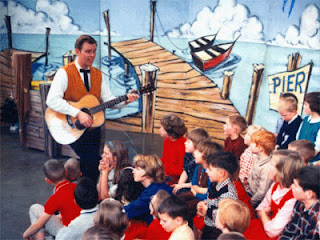 "Ramblin' Rod" told jokes, played the guitar, and introduced classic Popeye and Bugs Bunny cartoons. The show was wildly popular with my age group, and everyone I knew watched it religiously. Rod "interviewed" me between cartoons, shook my hand, and awarded me a gas-powered, Lotus racer. The massive television camera pulled in close, broadcasting live to the entire state. My parents beamed with pride in the studio audience. I think Dad wore a tie. More important, my friends and numerous cousins watched the show on actual TV! This was before everyone had video cameras, so this was highly unusual; there I was ON ACTUAL TV. My cousins were amazed. Even their parents stopped drinking and fighting long enough to watch! It was a little holiday magic, and I was on my way to becoming an artist.
The next day, there was photograph of me in the local newspaper holding the Lotus racer. "Little Bobby Rini," it said, "Draws Turkey, Wins Prize." No film footage of the moment exists, but I found these clips from "The Ramblin' Rod Show" so try and picture me in there, a nerdy little kid wearing glasses and holding an excellent drawing of a Thanksgiving turkey.

Oh, wow I haven't thought about Ramblin' Rod and his ever-growing collection of sweater pins in ages. Where I grew up we got both Portland and Seattle stations via cable so I could watch Rod and JP Patches. Now cartoons are on 24/7 but you can't beat the classics, especially when they're brought to you by a wacky tv host.

I agree, vinylsaurus! You can't beat the classic cartoons. There are more cartoons running around the clock, on many more channels, but with the exception of the Simpsons, they're either too cutesy (Strawberry Princess Ponys), or too crudely made (all those bad animations out there), or just brazen advertisements for toys in the guise of a cartoon.
I guess I'm just a cranky geezer who misses those wonderful Saturday morning cartoons of old!