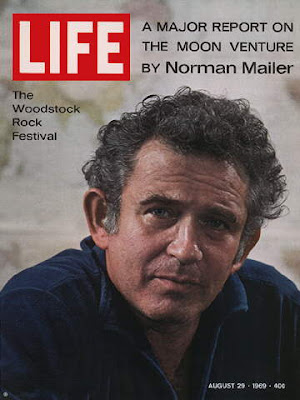 Norman Mailer (American writer, 1923-07) died early Saturday morning at the age of 84. Mailer is the last of the post-war literary lions to go, and his legacy will remain several great novels and works of "new journalism" combining the novelist's skill with reportage, books such as "Armies of the Night" and "The Executioner's Song," winning Mailer the National Book Award, and the Pulitzer Prize twice.
A scrappy, combative writer, Mailer was a fierce opponent in debate, combining Harvard-honed intelligence with Brooklyn street smarts to trounce any contenders (Hannity was suitably shredded recently). Mailer's view of the universe was both existential and Manichean, a struggle between equally matched good and evil, a contest in which there was no guarantee of good prevailing. He was a lifelong political lefty, though not in any simplistic sense, and he continued to fight at an age when most older writers seem content to accumulate laurels. Mailer despised George Bush and the Iraq War, delineating his arguments in the book "Why Are We at War?" and countless articles and speeches. Here are a couple clips from interviews.

"Iraq is the excuse for moving in an imperial direction. War with Iraq, as they originally conceived it, would be a quick, dramatic step that would enable them to control the Near East as a powerful base - not least because of the oil there, as well as the water supplies from the Tigris and Euphrates rivers - to build a world empire." International Herald Tribune, 2003

"Well, I can present other scenarios than the one offered by our two good Doctors of Magic, Rove and Bush, Masters of Advertising Sciences (Mendacity and Public Manipulation). Their access to confidential material is orders of magnitude larger than is available to any of us, but their scenario has been skewed by the outsize need to mischaracterize the greater part of intelligence they do receive..Embarking on a full-scale war to rid oneself of terrorists is analogous to hunting a hornet with a Sherman tank." From a letter in the New York Review of Books, 2003

Here, Mailer speaks with Charlie Rose about "The Spooky Art of Writing." His section begins about fifteen minutes in, so skip ahead to that point.