Bill Frisell is an amazing musician--a guitar player who combines jazz, rock, folk, country, oldtime Americana and otherworldly space music and makes it his own. I've seen him play an entire evening of Thelonious Monk, or trade jazzy licks with another guitar gunslinger, or draw from the great American songbook and play "Shenandoah" and "A Change is Gonna Come." He's also a crack session guitarist, and undoubtedly you've heard him play on records by others without even knowing it, with everyone from John Zorn to Elvis Costello, Lucinda Williams to Steve Earle, Ron Carter to Bono. His own albums are amazing journeys. My favorites are "Good Dog, Happy Man," "The Willies," "Have a Little Faith," and "History, Mystery," a double album with tracks originally written for Mysterio Sympatico, a multi-media collaboration with artist Jim Woodring that premiered at St. Ann's Warehouse in Brooklyn in 2002. 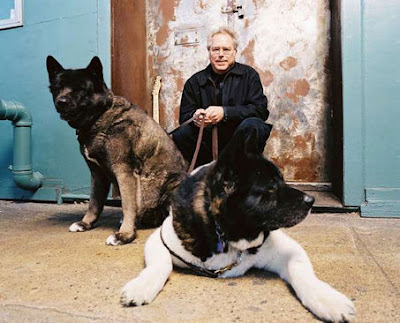 Bill Frisell runs with the big dogs but stays cool

Bill Frisell can play anything. Maybe that's why he's won Grammy Awards and topped the prestigious DownBeat Magazine's critic poll for best jazz album of the year and best guitar player of the year, several times. You'd think this would all go to his head, but I've had the pleasure of meeting Bill a few times and he's always been thoughtful and soft-spoken, with an easy smile and a gentle sense of humor--eons from the arrogance one might expect from a world class musician. He may be a musical genius, sure, but he's not about to throw the television out the hotel window. He's a guitar player inspired by music, all kinds. Go buy his albums.

Thanks so much for sharing these videos. That is an incredible interview and great to see a live version of Sugar Baby.