Oswald the Lucky Rabbit was an anthropomorphic rabbit created by Ub Iwerks and Walt Disney in the 1920s for Universal, but after a disagreement in 1929 (Disney requested an increased budget from Charles Mintz, and Mintz suggested Walt take a twenty percent budget cut) Disney left to create another character--based on Oswald but changed enough to avoid litigation--called Mickey Mouse. Perhaps you've heard of him. At any rate, Mintz opened his own studio (mostly of former Disney employees) and produced more Oswald cartoons, and then finally the production of Oswald fell to Walter Lantz (who would later create Woody Woodpecker) and Lantz produced a whopping 140 Oswald cartoons in the next decade. The character got a makeover in Lantz's hands (a cuter face and Mickey-style white gloves) and the race was on. Eventually, in 2006, the rights to Oswald and many other small assets were acquired by the Walt Disney Company.

This short film from the Walter Lantz Studios shows how animated films were made back in the 1930s and 40s. In this "Going Places" documentary, we follow the creation of an Oswald the Lucky Rabbit episode. 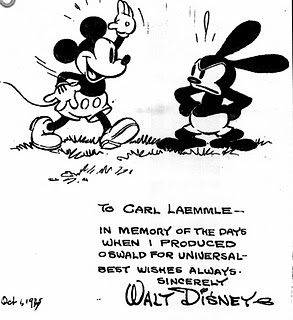 The political dramas of cartoonland continued after the age of cell animation morphed into the present age of computer animation. Pixar, one of the most succesful animation studios in the modern world (they made "Toy Story," "The Incredibles," "Ratatouille" and recently "Up") started under Disney's wing but had differences over "Toy Story 2," resulting in a new agreement. Pixar wanted to control production entirely and own the resulting film properties, collect 100% of the profits and pay Disney ten to fifteen percent for distribution. Disney made faces. The conditions were unacceptable to Disney, but Pixar--now highly successful and feeling some clout--refused to budge. Steve Jobs (yes, that Steve Jobs) told Michael Eisner, Disney head, that he would actively look for other partners. To make a long story short, Disney ended up buying Pixar for approximately $7.4 billion in an all-stock deal. 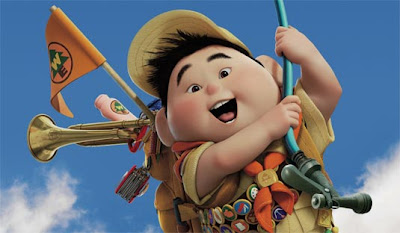 The following behind-the-scenes look at Pixar seems a stark contrast to the glimpse of the workaday world of the Lantz studios above, but don't let the gaudy luau shirts and razor scooters fool you; these Pixar people are highly trained professionals with the power and connections to create beautiful mind-blowing animation--and to crush rivals like the warlords of yesteryear. In spite of all the cute little animals and funny stories, the animated film industry is a multi-billion dollar global business that looks out for itself--as it always has. Under that white three-fingered glove is an iron fist.