Pete Seeger, folksinger, activist and longtime radical has written a new protest song about the disastrous BP oil spill. Seeger, born in 1919, isn't content to grow old quietly. He still gets riled up about injustice. Back in the day, Pete rode with Woody Guthrie throughout the country singing at rallies and barn dances and picket lines, at civil rights meetings and peace marches, and he was beaten and jailed but he didn't shut up. As an original member of the Weavers (with Woody) he was blacklisted by McCarthy in the fifties, but he didn't shut up. Now he's ninety one years old, his voice is rough and old age is wearing on him, but he still won't shut up. 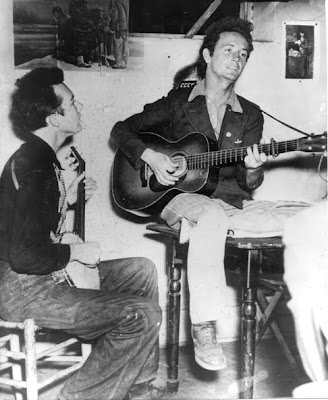 Pete Seeger and Woody Guthrie back in the day

Pete performed the new song at a fundraising concert for the Gulf Restoration Network and Global Green USA. "It's a strange, strange song," he said to Rolling Stone. "I performed for 40 newspaper and radio reporters," he said. "It made sense down there, too. When there's a great big problem lets get together and do something about it."
Posted by Bob Rini at 6:48 AM