Janis Joplin was a wild woman with a big heart and a big voice. In the parlance of the day, she let her freak flag fly. Larger than life, like a cross between Annie Oakley and Bessie Smith, she sang as if her life depended on it. Maybe it did. She acted tough, like she didn't care what anyone thought, but you can tell she sings the blues from experience. Back then, she was a crazy hippie freak and the squares didn't know what to make of her. Even Dick Cavett, probably the most intellectual of the talk show hosts, boasting a Yale education and liberal politics, has a hard time with Janis. She comes out like gangbusters in boots and scarves and feather boas, the last of the red hot mamas, and Cavett mistakenly thinks he can play her for laughs. She wins him over, as she wins us, with genuine warmth. And when she sings, forget about it it. You'd better feel it or you're a couple quarts low on soul. No doubt some slick producers might have thought, Well, this chick has talent if she only reigned it in a little, smoothed out her rough edges and acted a little more ladylike--but that would be missing the point. She was rough as a catfight in a barrelhouse and sweet as Tupelo honey. She could break your heart while she called you on your dirty lowdown ways. 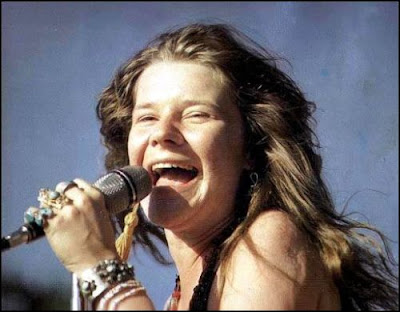 Nowadays, in this age of rehab and self-help, folks will remember Janis as a sixties icons who died--like so many of them--from her excesses, her addictions, more of a cautionary tale than real person, but that's simplifying Janis, and she was anything but simple. She was real, all right--so real she demanded you become real, too, and meet her halfway, at least, in that place beyond Hollywood plastic and pop entertainment with its cookie cutter sentiment. That's too much to ask of some people. When she talks about returning to her hometown for her high school reunion she's not just making clever chit chat for a talk show. It's an amazing moment. Watching these clips make me miss Janis and what she brought to the party--if she were here she'd probably laugh and say don't get so serious, honey, have a swig of Southern Comfort and let's get this party started.