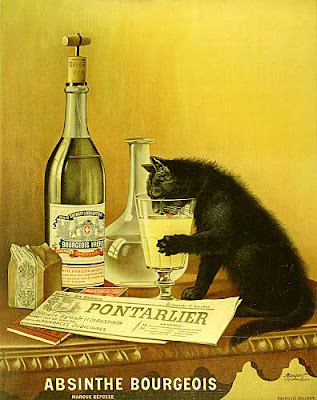 Oscar Wilde famously quipped, "What is the difference between a glass of absinthe and a sunset?"

The snappy comeback, of course, would be that a sunset is perfectly legal in the United States. Until now. (No, they haven't outlawed sunsets -- at least not yet). You could say the "green fairy" is making a comeback of it's own. For the first time in 95 years, it is legal to import absinthe -- genuine absinthe, made with a full measure of Grand Wormwood (Artemesia absinthium).

Absinthe has a sinister reputation, one as cloudy as it's louching effect. It was banned with much hysteria, but well after being championed by such creative artists as Toulouse Lautrec, Arthur Rimbaud, Edgar Allen Poe, and Pablo Picasso.

T.A. Breaux, the man behind the new import, didn't want to piggyback on those myths. Breaux is a sensible guy, a chemist and microbiologist, and he studied old recipes and tested vintage bottles of absinthe with gas chromatography-mass spectrometer machines. He made a detailed analysis of the vintage absinthe and set out to reproduce it, blending grand wormwood, green anise, and sweet fennel from Europe -- herbs employed by his 19th-century predecessors. Breaux's formula was approved by the Alcohol and Tobacco Trade Bureau, a division of the Treasury Department. The absinthe he worked on will be marketed under the name "Lucid," and available in a 750-milliliter bottle for $59.95. Others have also been approved for sale.

For more about T. A. Breaux and his research, here is a great article in WIRED:
http://www.wired.com/wired/archive/13.11/absinthe.html

For reliable information about Absinthe:
http://www.wormwoodsociety.org/