HALLOWEEN WEEK: day of the dead 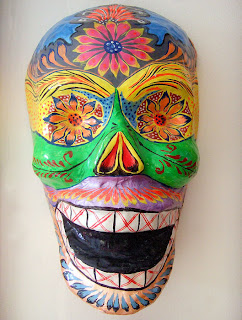 Dia de los Muertos, the Day of the Dead. In Mexico, and many parts of Latin America, people visit the graves of their loved ones, bringing toys for the dead children (los angelitos, the little angels) and bottles of tequila or mescal for the older dead. People place toys or special candies on the graves, and honor dead relatives by donning skull masks called calacas. The skulls are also placed on altars dedicated to the dead. Skulls made of sugar, with the names of the dead on the forehead, are eaten by relatives and friends.

When the Conquistadors first hit Mexico 500 years ago, they believed "the Indians" were mocking death -- so of course they tried to eradicate the ritual. Fortunately, the Spaniards didn't succeed, but they did manage to change the date. The celebration originally fell on the ninth month of the Aztec Solar Calendar (the beginning of our August) and was presided over by the goddess Mictecacihuatl, the queen of the underworld. To give it a more Christian feel, the Spaniards moved the celebration to All Saints' Day and All Souls' Day, November 1 and 2, when it is celebrated today.

Malcolm Lowry set "Under the Volcano" in Mexico, on the Day of the Dead. The book portrays the last twelve hours of Firmin, a former British Consul, living and dying in the shadow of the volcano Popocatepetl. The book, now regarded as a masterpiece, was initially rejected for publication, and Lowry wrote back a desperate, brilliant, and maddening letter defending the book.
"It can be regarded as a kind of symphony, or in another way as a kind of opera--or even a horse opera. It is hot music, a poem, a song, a comedy, a farce, and so forth. It is superficial, profound, entertaining, and boring, according to taste. It is a prophecy, a political warning, a cryptogram, a preposterous movie."
Lowry could have been describing the country itself. 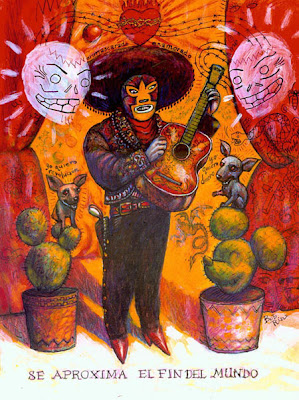 I painted Se Aproxima el Fin del Mundo as a tribute to Mexico and the Dia de los Muertos. The kitchen sink approach was the only way to go, and it's stuffed with all the clash and cliche of this country "so close to America, and so far from God." Enmascarado (the phantom wrestler from Lucha Libre) plays mariachi guitar, as a couple Chihuahuas stand on Mickey Mouse cacti ("You quiero revolucion," says one, "Yo quiero dinero," says the other; NOT "yo quiero taco bell," like the advertisement) all under the thorny heart and the watchful gaze of two ghostly calaveras.

For the sound of modern day Mexico, please click the button to hear The Mexican Institute of Sound performing "A Girl Like You." Viva Mexico!