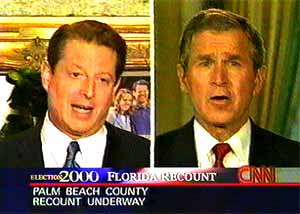 As you may have heard, the votes are in and Al Gore has been awarded the Nobel Peace Prize for his efforts surrounding global warming. The Nobel is the most prestigious prize in the world, and the nomination and selection process is rigorous and highly secretive, so Gore himself was stunned by the announcement.

Gore was stunned again this week. In a somewhat surprising reversal of the Nobel Committee, the United States Supreme Court has decided to interpose itself and award the prize to George W. Bush. In a narrowly divided 5-4 decision, amid charges of voter intimidation, ballot rigging, favoritism, and all manner of political shenanigans, the Court ruled in favor of the president. Needless to say, the Bush camp was jubilant.

"It's a beauty," Bush said, holding up the prize for reporters. "I am truly honored." He added, "We will stand by the court's decision."