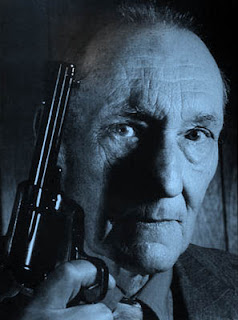 William S. Burroughs (1914-1997) writer, junkie, homosexual, American artist. After graduating from Harvard in 1936, he turns an ominous grey-green color and slips down a manhole to evade Hoover's flatfoots, emerging in Tangiers, part-reptile, part nasty blob. He's developed quite a habit by now and needs a recharge every couple hours, so distasteful episodes follow searching Arab streets in a desperate flop sweat, meat-hook reality closing in, eyelid television without the laugh-track, worlds away from America and those square cheerleader jesus junior chamber of commerce types buggering caddies before t-time, blowhard Eisenhower golfers with shark-finned cars, hometown boys, braggarts with thumbs in their vest pockets who laugh too loud and are secretly afraid of the dark. Burroughs sees right through these petty burghers like an X-ray. He's insane, yes, deranged with drug need, strung out and scribbling notes from the underground with a cold, naked fork, but he sure makes you nervous.

Burroughs captured the logic of the nightmare like no other writer before or since.

To hear him speak, push button: