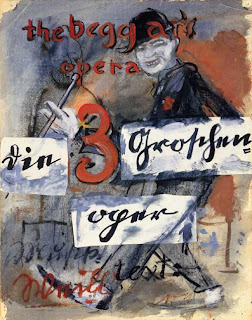 Okay, it's sad and sentimental, but no more than your beloved emo-core and the mega-selling soundtrack to Garden State. Besides, autumn is here, and it's a time for reflection. Too bad I missed this one last month, but here is the great Jimmy Durante singing "September Song." Pour yourself a whiskey and listen up.
The song was written by Kurt Weill, who is best known for writing the "Threepenny Opera" with Bertolt Brecht. The opera "by and for beggars" incorporated harsh reality and sharp politics with 1920s Berlin cabaret, and included "Die Moriat," also known as "Mack the Knife." The play opened in August, 1928, and was a smash hit.
Weill was Jewish, and a communist to boot, and when the Nazis rose to power he was forced to flee Germany. Brecht, a lifelong Marxist, also fled the political thugs but met their counterparts in the United States, where he was called before the House Un-American Activities Committee (HUAC) for being communistic, which led to being blacklisted by the movie bosses.