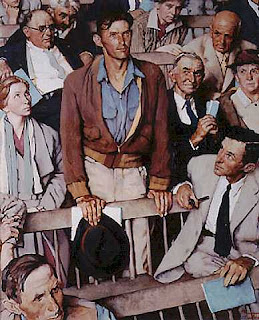 A student at the University of Florida stands up and asks Sen. John Kerry a rambling question about the 2000 election, impeachment, and his membership in the Yale secret society, Skull and Bones -- a membership shared with George W. Bush.
The student is dragged away, handcuffed, and tasered, as the crowd sits patiently and the Senator drones on.
Just before the student gets the 50,000 volt jolt -- as he's being wrestled to the floor by security guards -- he says "Don't tase me, bro!"

The phrase becomes a catchphrase, jolting the web awake. The video circulates and becomes a primary Google search. Pundits argue whether this was all a big put-on, whether the man was obnoxious, whether or not he deserved to have a jolt of 50,000 volts course through his body. Some call the incident an example of our gradual drift toward a police state. Others scurry to blame the victim. The question was impertinent, they say, or overlong. The student was rude and got what he deserved. Are we comfortably numb in our increasingly violent age? Do we instinctively rush to lick the boots of power, or identify with the underdog? In a polite society, should people shut up when they're told? Finally, does the First Amendment guarantee the right to freedom of speech even if you have a question that is overlong, rude, or inconvenient?
Watch the video. What do you think?