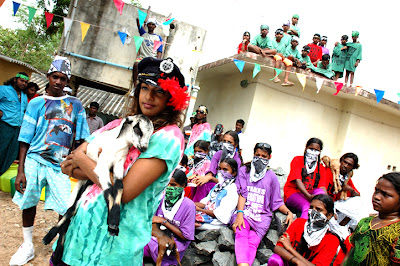 M.I.A. -- born Mathangi "Maya" Arulpragasam in 1977 -- is a sassy singer and mixer of juicy beats, Bombay pop, border-crossing electronica, ragga, dance, hip hop, and soul. Her new record, "Kala," got five and a half stars from Rolling Stone. Some are calling it the best record of the year. So what's Uncle Sam afraid of?

At the height of a civil war, Maya left Sri Lanka as a refugee with her mother. Her father is an activist turned militant, a founder of a revolutionary student group that merged with the Tamil Tigers, an organization labeled terrorist by the U.S. government. He was underground, so Maya hardly knew him. As a security precaution, when they met he was introduced to her as an uncle.

In London, she fell in love with reggae and hip hop, and became a visual artist known for her candy-color spray-painted art and handing out mixtapes. One was called "Piracy Funds Terrorism." When she finally recorded an album she named it after her father, "Arular." In spite of lyrics booming with revolutionary attitude -- or maybe because of it -- the music caught on big time, worldwide. She toured with Gwen Stefani, and had guest appearances with Bjork and Missy Elliott.

In April of 2006, after planning to record with Timbaland, she was denied a visa to enter the United States. The reason for the denial was not clearly explained.

"From Day One, this has been a mad, crazy thing," she says. "I say the things I'm not supposed to say, I look wrong, my music doesn't sound comfortable for any radio stations or genres, people are having issues with my videos when they're not rude or explicit or crazy controversial. I find it all really funny"

Whether M.I.A. is the voice of the developing world, the next Bob Marley, or a terrorist, she makes brilliant dance music. Her latest record is named after her mother, "Kala."