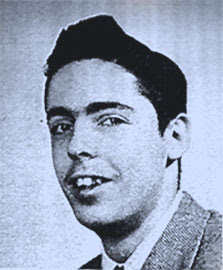 Another rare photograph of the face that launched a thousand dissertations.

Thomas Ruggles Pynchon, Jr., born May 8, 1937, lived in Seattle for a couple years, living in the U District and writing technical manuals for Boeing. Later on he wrote some novels, including one of the archetypal texts of post-modern fiction, "Gravity's Rainbow."
The dense, interwoven story takes place in London and Europe immediately following VE Day at the end of World War II, but reducing the complex narrative to a simple paragraph is a fool's errand. Suffice it to say conspiracy, entropy, prescience, militarism, obsession, bawdy humor, bad jokes, and the development of the V-1 rocket all figure prominantly against a backdrop of Pynchon's wide-ranging knowledge of science and technology, history, psychology, music, film, and literature. It's a doozy, by gum.
I've read it -- some parts a dozen times -- and have several dog-eared, underlined copies around the house, but I don't claim to understand it entirely. Passages are undeniably brilliant, but it's impossible to keep track of the mountain of information, the cast of characters, and all the scientific references without some help. Fortunately, Pynchon has fueled an obsessive army of scholarly monks devoted to his writing, and there are numerous critical works and concordances that help guide the novice. Some are listed below.
Is it all just a big put-on? A needlessly opaque virtuoso performance? Too bad you can't ask the man himself, but Pynchon makes J.D. Salinger look like a social butterfly. In this age of celebrity, he grants no interviews. He's never photographed. No one knows where he lives. In fact, when "Gravity's Rainbow" won the National Book Award in 1974, he sent the double-talking nutty professor Irwin Corey to give the acceptance speech, prompting some to wonder if the comic was actually Thomas Pynchon.
Years later, when the actor John Larroquette was planning to have a fictitious meeting with the reclusive writer on his sit-com, he was contacted by the man -- via Pynchon's agent, of course. Pynchon suggested he be described as wearing a Roky Erickson T-shirt. (see Roky Erikson below)

For more information on Pynchon, here are some good links: