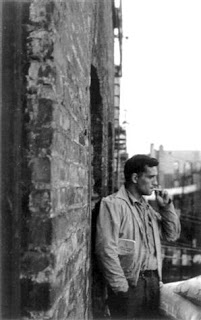 Like a man possessed, Jack Kerouac wrote "On The Road" on one continuous 120-foot scroll, a furious feat fueled by pharmaceuticals and possibly angels. Like Athena springing fully-formed from the head of Zeus, "Road" was born in one momentous rush, and this is now the stuff of legend. It may be popular in certain circles to dismiss the work as overheated youthful exuberance, but man you just know those cats are too square to swing with it. You dig?

This year, the scroll begins a 13-stop, four year tour. To commemorate "Road" hitting the road, I made a short film combining footage of Jack in the heady days of the Beats with a low-fi recording of him singing a sweet little song called "On The Road."
Posted by Bob Rini at 4:30 PM