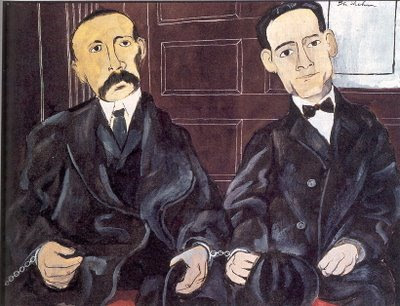 Ben Shahn used newspaper photos as a basis for a series of goaches (opaque watercolors) and tempera paintings commemorating the trial of Italian immigrants and anarchists Nicola Sacco and Bartolemeo Vanzetti.

The famous trial of Sacco and Vanzetti -- called "the most politically charged murder case in the history of American jurisprudence" -- celebrated it's 80th anniversary last week. Railroaded for their unpopular views, the two were electrocuted at Charlestown State Prison just after on . Their executions set off unprecedented mass demonstrations worldwide due to the atmosphere of prejudice that surrounded the proceedings.

From the Yale Bulletin: "The Sacco and Vanzetti case unfolded shortly after the end of the Bolshevik Revolution in and World War I, during the period of intense xenophobia and anti-radical paranoia known as the "Red Scare." On , police in , arrested Sacco, a shoemaker, and Vanzetti, a fish peddler, charging them with being "suspicious characters."' They were later charged with murder.

During the proceedings, Judge Webster Thayer made offhand, anti-Italian remarks, and told the jury: "This man [Vanzetti], although he may not have actually committed the crime attributed to him, is nevertheless culpable, because he is the enemy of our existing institutions."

For more, see Peter Miller's excellent documentary about the case.