We should strive to be even-handed and objective, to keep an open mind, and to consider other viewpoints and the possibility--believe it or not--that we may be wrong. We value these characteristics of critical thinking, and while we may rarely, if ever, attain these lofty goals at least we're trying.

This dolt isn't even trying. Fueled by fear and hatred, not to mention deliberate misinformation spewed by Palin and Fox News and the Tea Party mob, he hasn't the slightest interest in critical thinking. Mention it, and he'd probably hit you with a baseball bat. God is on his side (in his mind, anyway) and so is patriotism and capitalism and the glorious march of history. We can laugh at his histrionics, but his rage is scary and something about him reeks of sulfur. He's a part of the march of history, all right, but one shod in jackboots. Maybe he's just a nut who should stop and take a deep breath, you say, and he should switch to decaf, but it's not just a psychological condition. He speaks--or rants and raves--for a good many angry people out there. That's the scary part. 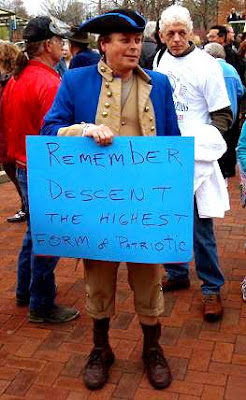 He puts our critical thinking to a test. In all fairness, striving to be objective, we have to say we might think the same things if we were in his shoes--if we had his narrow frame of reference and his lack of education and his basic life experiences. And if our head happened to be filled with wood shavings. Hey, I tried.
Posted by Bob Rini at 12:47 PM