MEET THE MINE OWNER

Don Blankenship is the chairman and CEO of Massey Energy, Appalachia's biggest coal company, and owner of the mine where 29 miners were killed Monday. Massey made $2.7 billion last year. Blankenship is a very powerful man in West Virginia, and a political powerbroker right out of a Thomas Nast cartoon who has thrown his weight around in local elections and supported right-wing tea party Republican causes. His cavalier attitude about mine safety precautions has forced him to answer tough questions since Monday's tragic explosion.

The Upper Branch mine was cited for 53 safety violations in March alone, on top of 458 in 2009. The Mine Safety and Health Administration, the federal agency charged with oversight for mining operations, sought $900,000 in penalties against the facility last year. 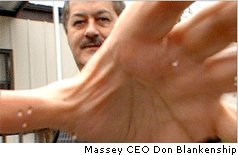 Here are some great Don Blankenship moments, courtesy of "Crooks and Liars," a blog that covers the worst corporate criminals.

Sen. Robert Byrd (D-WV) took Massey to task for its "disregard for human life and safety." “Such arrogance suggests a blatant disregard for the impact of their mining practices on our communities, residents and particularly our children,” Byrd said in a statement. “These are children’s lives we are talking about.”

According to "Crooks and Liars," Blankenship spent over a million dollars along with other US Chamber buddies like Verizon to sponsor last year's Labor Day Tea Party, also known as the 'Friends of America Rally.' Guest speakers included right wingers Sean Hannity and Ted Nugent, and the event focused on "President Obama, Democrats, and any one who doesn't salute God, coal, and apple pie."