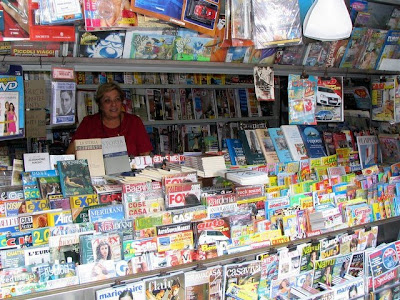 Beyond the endless churn of crapola about Tiger Woods' sexploits, Sandra Bullock's husband's sexploits, "news-vertisements" for the new iPad, Sarah Palin's latest press release, and the standard march of celebrities, there are some interesting stories out there. I swear!

While we're "living in the future" with our wonderful new high tech toys some people still eke out a living like serfs in medieval times. Not in Africa or Asia, but right here in our own Third World called West Virginia where the worst mining disaster since 1984 has left 25 miners dead and four more missing. (Maybe some deep-digging investigative journalist will mention George Bush's deregulation of mining laws? Probably not.) Read the AP story HERE.

"Who Killed the Miners? Profits Over Safety," by Jeff Biggers. Biggers, the author of "The United States of Appalachia," and a coalminer's grandson, reminds us that all mining safety laws are written in blood. Read the full story HERE.

"Can "Neuro Lit Crit" Save the Humanities?" An intelligent debate over the increasingly common (con)fusion of Literature and Psychology. Is it a smart move, a desperate dive for cash, an unholy alliance of disciplines at cross-purposes, or the academic equivalent of "folk mass" to bring the formerly faithful back into the fold? Read the NYTimes debate HERE.

The Telegraph in the UK reports that Chinese authorities denied Bob Dylan a permit to perform his music in their country. Dylan had been scheduled to tour Beijing, Shanghai, Taiwan, South Korea and Hong Kong. "China's Ministry of Culture did not give us permission to stage concerts in Beijing and Shanghai, so we had no alternative to scrap plans for a South East Asian tour,' said Jeffrey Wu, the promoter's head of operations. Wu added that Chinese authorities may have been worried about Dylan's past as a counterculture hero. Read the full story HERE.

Matt Taibbi has written another wonderful article, "Looting Main Street: How the nation's biggest banks are ripping off American cities with the same predatory deals that brought down Greece." The title says it all. Read it HERE.
Posted by Bob Rini at 6:51 AM