THE PERILS OF PALIN

Well, for starters, how about first-class commercial air travel for two or a private jet -- "must be a Lear 60 or larger" -- from Alaska to California and back, and a one-bedroom suite and two single rooms in a deluxe hotel "registered under an alias." And two unopened bottles of still water with "bendable straws." The document did not state Palin's fee, but she has reportedly been getting as much as $100,000 per speaking gig. 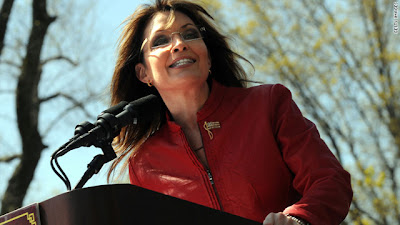 California Attorney General Edmund Brown said Tuesday his office will look into accusations that officials at a state university violated public records laws. A state senator, San Francisco Democrat Leland Yee, asked the university to justify the expense at a time when the state is struggling financially. University officials said they had not been informed of the investigation, but claim they acted correctly and promised they will cooperate fully.

Sure, we're in a depression, and yes, college tuition has skyrocketed, but Sarah Palin says she doesn't travel this great nation for the money and Lear jets and rockstar perks--she does it because she cares about America. Or something like that. Her credibility may be at an all-time low, but it's a look that seems to work for her. According to ABC News, Palin has earned an estimated $12 million since July when she resigned as governor in mid-term.

Shame on you, Sarah, you greedy little cow. 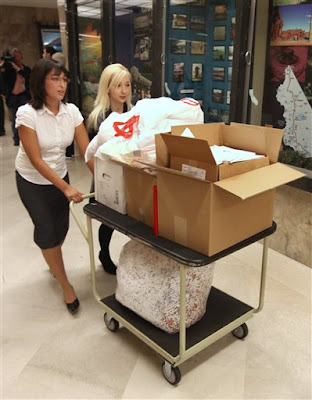 California State students Alicia Lewis, left, and Ashli Briggs with the documents.
Posted by Bob Rini at 1:49 AM

Almost daily we listen to her trash talk (she is in the Quayle and “W” league), all thanks to the man who now claims that he never called himself a maverick, McCain, right, tell us another. She spends her days trash talking it is only fitting that someone found a great place for her contract. You know she is a VP silver metal winner. I guess some dumpster diving found it, All’s Well That Ends Well.