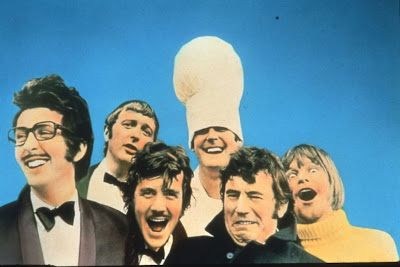 Today is Friday, hooray! After a week of plague, pestilence, mining disasters, war, civil unrest (not to mention lack of restful sleep) and a certain crypto-fascist former governor of Alaska, it's time for a comedy break. More than time! Lest you think we're humorless old sods, drug-addled beatniks, doctrinaire politicos, or merely self-aggrandizing bloggers, we cleverly turn the tables on you in this segment, dear reader, and pull the rhetorical rug out from under you by presenting the classic comedy of Monty Python. Why not American comedy, you say, with a mouthful of oatmeal and vitriol. Why outsource our comedy to foreigners, you say, ready to dash off an angry letter or hoist a sadly misspelled sign at the local tea party gathering of hatemongers. Why these cheeky Brits?

It's simple, really. Because they're hilarious.

Two favorites from the Python oeuvre are "The Parrot Sketch" and "The Lumberjack Song." This sort of thing pioneered the absurdist branch of the humor tree that later developed into Saturday Night Live and a number of terrible imitations. Who can we blame for all this?

The culprits are John Cleese, Eric Idle, Terry Jones, Michael Palin, Graham Chapman and Terry Gilliam, an exceedingly clever and innovative troupe of actors and writers who had their beginnings in the august environs of Oxford and Cambridge and went on to become The Beatles of Comedy. They first caught our attention with the strange BBC television series "Monty Python's Flying Circus" (1969-74), a godsend to insomniacs, surly teenagers and hopheads everywhere. I'm kidding, of course--their biggest fans were always the brightest and the best-dressed, people who recognized one another by the twinkle in their eyes and the ability to recite the funny bits, such as this nasty insult from the French soldier:

"I don't want to talk to you no more, you empty headed animal food trough wiper. I fart in your general direction. Your mother was a hamster and your father smelt of elderberries." 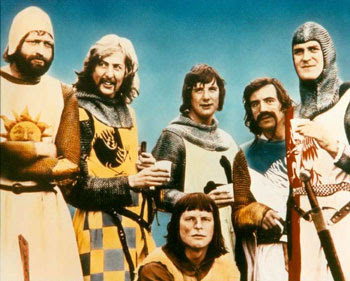 In 1975, they released a feature film, "Monty Python and the Holy Grail," an hilarious send-up of Arthurian legend, and in 1979 applied their subversive talents to biblical times in "The Life of Brian," the story of an infant born in the neighboring stable to Christ and the case of his mistaken identity, a near-Messiah, if you will. Brilliant stuff that was immediately attacked by religious simpletons who hadn't actually seen the film. Bloody typical, eh? 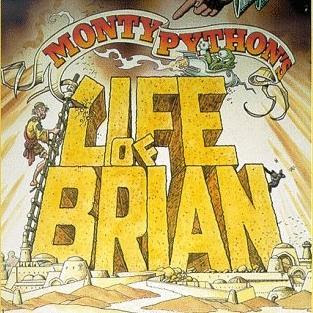 The Pythons continued to make wonderful comedy, of course, and Gilliam--the lone American in the group (USA!USA!)--went on to become a well-known filmmaker in his own right, directing "Brazil" (1985), "The Fisher King" (1991) and "Fear and Loathing in Last Vegas" (1998) among others. That's enough background for now--for more of the story we suggest you check out the excellent documentary, "Monty Python: Almost the Truth (the Lawyer's Cut)" (2009), a six part film we just watched. Anyway, here are some more funny bits.


The Sermon on the Mount as it might have been, from "The Life of Brian."

Spoiler alert: The brilliant ending of "The Life of Brian" finds Brian, the man mistaken for the Messiah, learning a lesson about Life at the last moment. The scene was typically Pythonesque, and while it may have infuriated dunderheads who shouted sacrilege it was actually quite respectful of Christ throughout, and only poked fun at his followers and their interpretation of his teachings. Basically, it poked fun at those very people who saw blasphemy under every bed.