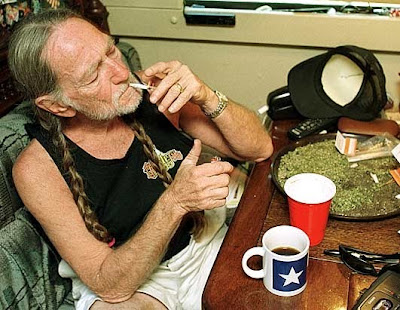 It's 4/20. For years, "four-twenty" has been a code word for marijuana. There will be 4/20 celebrations worldwide today, along with rallies and teach-ins and political actions aimed at raising consciousness about grass and repealing the pot prohibition. Some, like Willie Nelson (pictured above), will be celebrating in private.


The editor of "High Times" magazine explains the story behind 420.

Attitudes are changing. Antiquated laws are being challenged. People are questioning authority. Currently, there is a ballot measure in California to legalize marijuana, and Governor Schwarzenegger says he thinks cannabis--the state's largest cash crop--might help save the state's anemic economy. Medical marijuana laws have passed in many states, and cannabis dispensaries are popping up like weeds. In many cities and towns, police have been instructed to make busting potheads a low priority--a big change from the jail-filling sweeps during the height of the "drug war" not long ago. 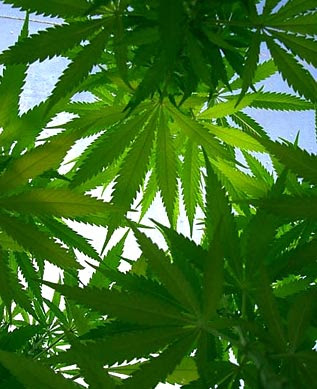 Obviously, we're faced with more pressing concerns in the grand scheme of things--war, poverty, health care, hunger, jobs, race, sex, the economy--and weed is hardly that important, but maybe that's the point. Maybe that's why it will finally be seen in perspective as a relative non-problem, science will trump superstition, and cannabis will be regulated for adults like our beloved (and undoubtedly more dangerous) drugs of choice, booze and cigarettes. Maybe money--as the Governator suggests--will be the key that finally turns the lock.

As usual, the status quo will be hard to budge. Powerful reactionaries and vested interests will fight to stop any progressive change in the body politic, casting pot as a moral issue. The Forces of Inertia seem to be losing ground, however, and they may lose the battle to retain our antiquated pot laws. Who knows? We may see the end of pot prohibition yet. Even the mainstream media is getting into the act; longtime willing dispensers of anti-marijuana propaganda, nowadays they don't want to get left behind the curve and there have been a number of "special reports" on the subject lately (check out CNBC's here). People are talking. If you'll pardon the expression, there's a buzz out there.


An interesting history of marijuana dispels some myths about the "killer weed."
Posted by Bob Rini at 12:04 AM