Tina Fey, the funniest woman on television, hosted Saturday Night Live last night and reprised her role as Sarah Palin. It was the funniest SNL in a long, long time. One the show, "Palin" announced her latest career move since "winning the silver" in the presidential election, and that is running her own television network. The Palin Network will air such shows as "Todd!", "Are You Smarter than a Half-Term Governor?", "The Tonight Show with Jay Leno" and my favorite,"Hey Journalist, I Gotcha," in which Palin will re-edit past interviews to make it look like her interviewers -- CBS' Katie Couric, for instance -- were "woefully unprepared."

An angry conservative wrote into Facebook this morning, whining about the SNL treatment, "Whatever would liberals do without Sarah Palin?"

Let's turn that question on it's head. Whatever would conservatives do without Sarah Palin? They'd be stuck with some other easy target for humorists-- weeping Glenn Beck or cranky McCain or Newt Gingrich--or that angry mob of farmers with pitchforks and misspelled signs. SNL could do them all. Those "clever New York liberals" are just too dang funny! 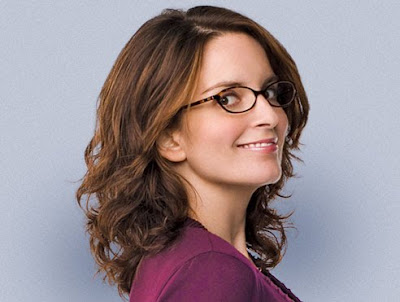 Women We Love: Tina Fey, creator and star of the best show on TV, "30 Rock," and a wicked Sarah Palin impersonator
Posted by Bob Rini at 9:09 AM