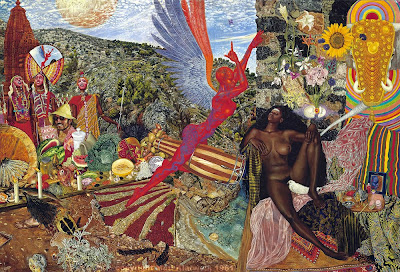 Abdul Mati Klarwein painted "Annunciation" in 1961. You may remember it used for the cover of "Abraxas" years later. Miles Davis also used the artist's work for the cover of "Bitches Brew." Klarwein's lurid, lysergic surrealism seemed to invite either seductive pipedreams or unsettling nightmares. Musicians responded, using it to represent some of their most experimental work, and it's hard to separate these discs from their "cover art." With the reduction of album art to CD size, and then finally vanishing altogether in the age of MP3s, it's hard to imagine the role cover art played in the total experience of the music. Mati's artwork was used on album covers for many others besides Miles and Santana, including Eric Dolphy, Jackie Maclean, Osibisa, The Last Poets, Leonard Bernstein, Greg Allman, Brian Eno and Earth, Wind and Fire. (click images to enlarge) 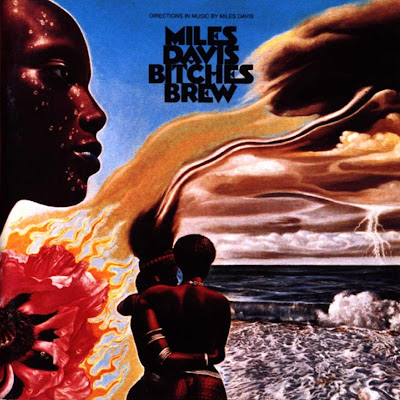 Mati Klarwein (1932-2002) was born in Hamburg, Germany, of Jewish origin. His family escaped when Hitler rose to power, moving to Palestine. In 1948, when the territory became Israel, his family moved to Paris where Mati attended the Ecole des Beaux-Arts and later studied with Fernand Leger. Mati traveled and lived in many places, including India, Tibet, Bali, North Africa, Europe and the Americas before finally settling in New York in the early 1960s.
Posted by Bob Rini at 9:14 AM

Amazing work, so full of detail. I love his work and the entire school of Surrealism. I introduce Klarwein to my students in Graphic Design and Art 1 classes, when we do our Surrealism unit. Thanks for sharing.
Peace - - Otto

Thanks, Otto. He does remarkable work--I'm glad your passing it on to your students.

I don't know why these comments don't show up on the front page. This new design makeover is still full of mystery.