Spike Jones perfectly expresses our feelings about patriotism in this clip. It's kind of crazy, huh? Hear the rattling sabers and the pounding drums, the fizzle of fireworks and the flatulent brass--this is America, by golly! Hooray! We're putting up this special red, white and hullabaloo a day early because tomorrow we'll be out grilling hot dogs and shooting off rockets and drinking beers and forgetting all common sense. You know, freedom stuff. Take a whiff. You can almost smell the gunpowder and ballpark franks--it smells like victory. Have a happy 4th of July. With that in mind, here are some mindful thoughts on patriotism:

“As long as people believe in absurdities, they will continue to commit atrocities.”
—Voltaire

“Conceit, arrogance and egotism are the essentials of patriotism…Patriotism assumes that our globe is divided into little spots, each one surrounded by an iron gate. Those who had the fortune of being born on some particular spot, consider themselves better, nobler, grander, more intelligent than the living beings inhabiting any other spot. It is, therefore, the duty of everyone living on that chosen spot to fight, kill, and die in the attempt to impose his superiority upon all others."
— Emma Goldman

“The loud little handful will shout for war. The pulpit will warily and cautiously protest at first…The great mass of the nation will rub its sleepy eyes, and will try to make out why there should be a war, and they will say earnestly and indignantly: ‘It is unjust and dishonorable and there is no need for war.’ Then the few will shout even louder…Before long you will see a curious thing: anti-war speakers will be stoned from the platform, and free speech will be strangled by hordes of furious men who still agree with the speakers but dare not admit it...Next, statesmen will invent cheap lies, putting blame upon the nation that is attacked, and every man will be glad of those conscience-soothing falsities, and will diligently study them, and refuse to examine any refutations of them; and thus he will by and by convince himself that the war is just, and will thank God for the better sleep he enjoys after this process of grotesque self-deception.”
— Mark Twain 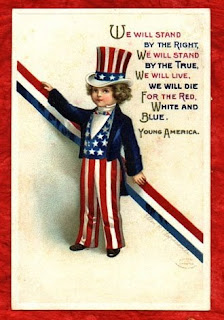