JIM WOODRING HAS A NEW BOOK 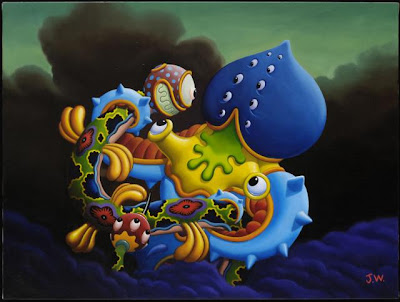 Jim Woodring is a visionary artist who captures dreams in a fine net and brings them back to share. His vivid paintings and beautifully rendered pen and ink drawings have blown minds for years, and now he has a new graphic novel called Weathercraft. If I told you how good it was you wouldn't believe me, since I'm a friend of Jim's, so here's what the New York Times (May 27, 2010) had to say:

"Over the last few decades, Jim Wood­ring has been drawing a series of wordless, blissfully cruel slapstick fables, set in a world of grotesque entities and psychedelic minarets: half unshakable nightmare, half Chuck Jones cartoon filtered through the Bhagavad Gita." 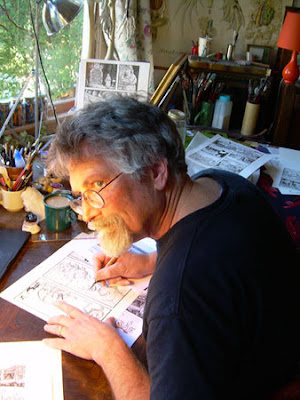 Sounds like the New York Times is smoking something funny, you say, but they are simply under the powerful psychedelic spell of Jim Woodring. That's the risk you take encountering his work. The new book is no different, and pulls you into another dimension. It's hard to describe. Here's the Times again, taking a stab at it: 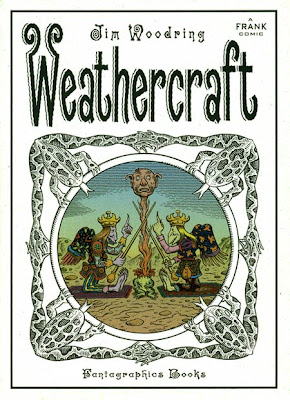 "WEATHERCRAFT (Fantagraphics, $19.99) throws a spotlight on the venal, piglike creature Manhog, who’s often the villain of Wood­ring’s stories. After a series of scourges inflicted by bees, flat-headed monstrosities and a flesh-warping devil, Manhog attains enlightenment or something like it, then rips open the Veil of Maya with his bare hands and avenges a horribly mutated pyramidal chicken, eventually sacrificing his enlightenment again. At least, that’s what seems to be going on: Woodring’s story flows so smoothly and delightfully from each image to the next that it’s easy to ignore that it has its own idea of sense, which may not jibe with anybody else’s."
-New York Times, (5/27/10)

Woo-eee, those city boys sure can talk.


Jim was interviewed recently on the Dusty Wright Show for his opening in New York. He won't watch it, but you can.

Jim was just interviewed by the AV Club at the Onion--check it out here.
Posted by Bob Rini at 4:15 PM