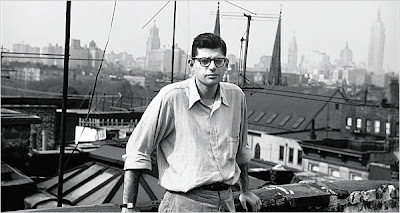 "Howl" and beat poet Allen Ginsberg get the Hollywood treatment. Shocking for its boundless unguarded stream of consciousness ranting and its graphic and disturbing imagery when it was first published in 1956 (and still shocking to some, even in this age of no-holds-barred internet porn and relatively relaxed attitudes about language and sex) "Howl" landed Ginsberg in a huge obscenity trial. Not surprisingly. This game-changing poem was a crazy headlong visionary jam howled by a bearded, pot-smoking, gay, weirdo, communist, hallucinating Buddhist, and it provided an easy target for the so-called moral guardians of the day. Still, the question remains: should an adult in a free society be allowed to read what he or she wants?

Watch these clips from "Howl," the movie:

I saw the best minds of my generation destroyed by madness,
starving hysterical naked, dragging themselves through the negro streets at dawn
looking for an angry fix,
angelheaded hipsters burning for the ancient heavenly connection to the starry dynamo in the machinery of night,
who poverty and tatters and hollow-eyed and high sat
up smoking in the supernatural darkness of cold-water flats floating across the tops of cities
contemplating jazz,
who bared their brains to Heaven under the El and
saw Mohammedan angels staggering on tenement roofs illuminated,
who passed through universities with radiant cool eyes
hallucinating Arkansas and Blake-light tragedy
among the scholars of war,
who were expelled from the academies for crazy &
publishing obscene odes on the windows of the skull,
who cowered in unshaven rooms in underwear,
burning their money in wastebaskets and listening
to the Terror through the wall,
who got busted in their pubic beards returning through
Laredo with a belt of marijuana for New York...

"Howl" read by Ginsberg and actor John Turturro.
Posted by Bob Rini at 7:20 AM

WOW! THOSE WERE THE DAYS. WHAT TALENT AND VISION!