This is a training film for the Lockheed P-38 Lightning shown to aviation cadets in the US Army Air Corps (the forerunner of the US Air Force) during World War II. I've been researching the air war for a writing project I'm working on. We know fighter pilots from the movies--romantic characters like Errol Flynn looking dashing in their flak jackets and crushed caps, silk scarves flying, risking it all in the skies--but, aside from guts, what did it take to become a fighter pilot? Consulting the USAAF Handbook 1939-45, I was surprised how extensive the training was for all aviation cadets--but especially fighter pilots.

Flying training took up to 36 weeks--12 each for primary, basic and advanced training--and at any point a cadet could "wash out" and get sent to gunnery school. That would be a one-way ticket to the infantry.

Pre-flight training took 1-5 months, depending on test scores, and a barrage of physio-motor tests and a 64 exam: from here--if you didn't get bounced--you would be classified to begin training as a navigator, a bombardier or a pilot.

Aviation cadets continued with Primary Training. Primary consisted of 225 hours of ground school instruction and 65 hours of flight training. Advanced training took ten weeks, with 70 hours flying, 60 hours ground school, and 19 military. Based on performance and choice, cadets were earmarked for heavy or medium bombardment, transports, troop carriers or twin-engine flyers--which could be large bombers or a twin-engine fighter plane like the P-38. At the end of advanced training, the cadet received his silver pilot's wings and was commissioned a 2nd lieutenant. 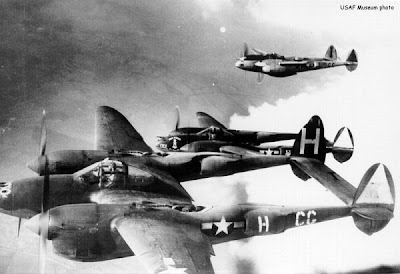 The 55th Fighter Group, in flight

But it wasn't over yet. From there, pilots trained in a five week transition course with the plane they would be flying. Up to now, they had trained in single-engine planes, but those destined for flying P-38s would now fly P-322s (modified P-38s). Through this course, pilots would become well-versed in landings and take-offs (every cadet landed 175 times) and expected to exhibit precision control in flying elementary 8s, lazy 8s, pylon 8s, barrel rolls, Immelmann turns and chandelles. From there, they formed fighting teams and then it was off to the war.

I've shown the essentials, there is plenty more, all part of becoming a fighter pilot. In their crushed caps and flak jackets, the flyboys made it look easy, but behind all the glamor they were highly trained professionals. During the war, air crews had a higher mortality rate than even the infantry, hovering around 50% during its peak. The number of combat missions required of an aviator grew from 25 to 30 and then finally 35. The odds were never good, but every time our required nerves of steel with flak guns and enemy fighters trying to shoot you down. 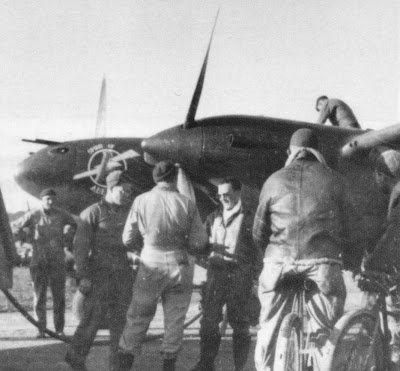 My uncle, Lt. Albert Albino, talks with the ground crew in front of his P-38H, "The Spirit of Aberdeen." He flew with the 55th Fighter Group, 38th Squadron of the Mighty Eighth Air Force based in Nuthampstead, England. He was shot down (killed in action) on November 29th, 1943.
Posted by Bob Rini at 8:53 AM

Enjoyed the blog post. Was the increase in missions from 25 to 30 and so on across the board? Fighters and bombers?

I'm looking for people to take part in my USAAF project by creating a tribute to an airman. Would you like to take part? More info here http://happywarriors.co.uk/create-a-tribute