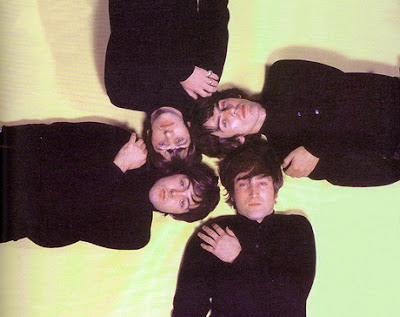 Scientists at Leeds University are asking people to recall their Beatles memories as part of a study to better understand how musical memories help shape a person's identity. If you're like me, you've got plenty of Beatles memories, and memories linked to Beatles music. They're part of the soundtrack of growing up in the 1960s and 70s for all of us, but if you were a fan, they were even more important. I can remember getting the albums as they were released, one by one, and learning them by heart, while my uncles said they looked like girls with those crazy haircuts, and they just made noise. "Yeah, yeah, yeah!" This was well before Sinatra covered "Something," and won over the so-called Greatest Generation with a Beatles tune.

For those of you who missed it, either being born too early or too late, it's hard to convey the doors these Liverpudlians opened for us kids to jump through. There were other groups, of course, some really great, but these guys set the standard. Hell, they created the standard as far as pop combos are concerned. The rock and roll of the fifties had died out, and there were hordes of phony teen idols, Fabians and the like, filling the void after Elvis went into the Army and emerged reconditioned like McMurphy in One Flew Over the Cuckoo's Nest. No hope there. Television was full of squares and blandos like Pat Boone in his white bucks, snoozers like Andy Williams, old crooners from Vegas, and the champagne music of Lawrence Welk, which was piped into living rooms and filling retirement home dancefloors with processed cheese. In that cultural gridlock, the Beatles sprang from nowhere (England?) loud and exciting and obviously having a good time doing it! They were clever lads who wrote and played great music, and the kids got it immediately.

Watching this clip from August of 1965, of the Beatles playing Shea Stadium, will undoubtedly bring back memories for some of you. For more about the Leeds University study of the music memory, click here.
Posted by Bob Rini at 1:40 PM

Glad you liked it, expat! That's a great show. The Leeds study is linked with hypertext, at the end of the post. It's at
http://www.timesonline.co.uk/tol/news/uk/science/article3512040.ece