According to John Hodgman, in The McSweeney's Joke Book of Book Jokes, authors and books are funny "because they are sad. They are as sad as zeppelins are -- they wish to soar, but they are using a technology that is old, largely forgotten, highly flammable."
Hodgman triggers a synaptic linkage, bringing a huge, old, largely forgotten, highly flammable rock band to mind. Unlike cartoonist Ellen Forney, who wrote and illustrated the comic "I [heart] Led Zeppelin," my feelings are complicated. I don't [heart] them uncritically. It's more of a love/hate relationship. They are overwrought, lumbering, reactionary, and personify all the rockist wretched excess of stadium groups punk came along to destroy. Zep stocks the "classic rock" stations like rack-jobbers, providing tired old warhorses for button-down nostalgics, and false memories for kids who weren't even there in the first place. Honestly, I could do without hearing "Stairway to Heaven" ever again. 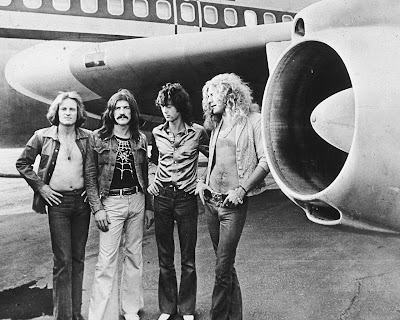 On the other hand, once in a while, the behemoth lifts off. Those moments rattle me with cognitive dissonance; I know I shouldn't like it, but I do. The earth moves, and Led Zep, that improbable wasp trapped in fossilized amber, somehow takes wing. Watch this clip of "Kashmir." You wonder, will this thing ever fly? It does.
Posted by Bob Rini at 8:08 AM