SUBMITTED FOR YOUR APPROVAL 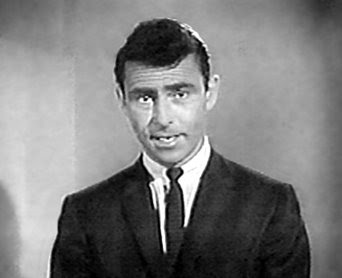 We love the Twilight Zone. Rod Serling was one of the bright lights of early television. Now, after half a century, a once-banned episode is finally surfacing; a show based on the murder of Emmett Till, a very real fourteen year old black boy visiting Mississippi from Chicago who allegedly whistled at a white girl and was then brutally lynched. The show was banned from television. God forbid you alienate pro-lynching advertisers!
Of course, at the time of the murder, the "liberal" (when did that become such a dirty word) Serling had written many scripts dealing with social justice issues. That was part of the fabric and weave of the Twilight Zone. But this was simply too controversial, and the network was flooded with protest letters from the white supremacist group, The White Citizen's Council. Executives caved to the racists in a cowardly manner. They gutted the script, insisted on changing it drastically, and wouldn't even allow the word "lynching." They wouldn't let the central figure be "a negro," and changed him to Mexican. Finally, after the evisceration, the episode was banned altogether. All those advertisers selling sheets and other fashion accessories were satisfied. The "conservatives" (when will that become a dirty word?) throughout America, and especially the South, were triumphant. They could avoid unpleasant reality once again, while continuing to bemoan the bias of the so-called "Liberal Media."

Read more about the story here in the Washington Post.

Here is a clip from a PBS documentary about Rod Serling and the Twilight Zone that refers to the incident.