Celebrated tenor, Giuseppe di Stefano, longtime singing partner with Maria Callas, died in his home Monday. Born on July 24, 1921, in Motta Sant’Anastasia, a village near Catania, Sicily, Di Stefano made his operatic debut in 1946. He performed in the northern Italian town of Reggio Emilia, as Des Grieux in Massenet’s “Manon.” He performed the same role the following year when he made his debut at La Scala.

You could say di Stefano's life was an opera. He rose to fame and riches from humble beginnings, sang all over the world, and then came to a tragic violent end. He death was caused by injuries suffered several years ago from unknown assailants, which ailed him for the rest of his life. In winter 2004, there was an attack on his family’s villa in Kenya; unidentified aggressors struck both the tenor and his wife. He awakened from a coma after several surgeries, but never fully recovered. He was 86. 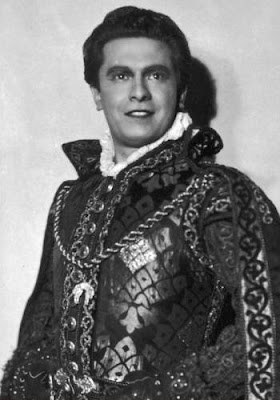 It's unusual to have opera on the blog -- as you know, we mostly lean toward rock, soul, and rhythm and blues -- but we're actually opera fans, too. This past Saturday we saw a fantastic production of "Tosca" at the Seattle Opera. There is nothing like the spectacle -- the costumes, the sets, the music, the voices -- of a good opera. Why leave such a grand tradition to the snobs? Sure, the tickets can be expensive, but cheaper ones are available for dress rehearsals. If you've never been, then consider it a splurge, something on your bucket list before you die.

Here, Giuseppe di Stefano performs "Core 'ngrato" by Cardillo, a song you may remember from The Sopranos, when Uncle Junior (Domenic Chianese) sang it at the wedding. The words mean "Ungrateful Heart...you have stolen my life!"