It's been five years since the start of the war in Iraq. At this moment, 4,297 US troops have died (not counting soldiers-for-hire, a sizable group) and more than a million Iraqis. More than $500 Billion has been spent so far, with estimates as high as three trillion for the region before this is over. There is nothing clever to say about it. Still, I thought it shouldn't pass unremarked in these posts. 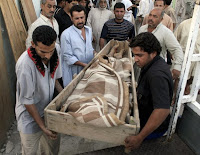 THE FUNERAL OF A SOLDIER


The funeral of Cpl. Maria Lauterbach, killed in Iraq, disrupted by fundamentalists from the Westboro Baptist Church. The "church" is a hate group run by Fred Phelps, of Topeka, Kansas, who believes "God Hates Fags" as well as Catholics, Jews, Irish, Swedes, and Mexicans. Their gripe with the army is the "don't ask, don't tell" policy. This proves you don't have to go half way around the world to find crazy religious extremists. Meet the American Taliban.

To make the numbers more real, check out the "Faces of the Fallen" in the Washington Post by clicking HERE.

A casualty counter is located HERE.
Posted by Bob Rini at 4:40 PM

Phelps and his followers are complete idiots. If there is a loving God, he wouldn't be happy with these creations.

It makes you wonder what weird, dark, repressed psychology produces such hateful people. I think religious fundamentalism fans the flames, but you have to start with a hot coal to begin with. It's easy to be an armchair psychologist, but I wonder if these folks were beaten and abused themselves, and all they know is that caged animal fear, like dogs raised to kill. Whatever happed to "God is Love?"